The Pearl of Andaman Sea

When thinking about Phuket island, you might think of pristine beaches, white sand and nightlife. However, Phuket has a lot more to offer and you might be surprise just how much you can do on the island.

First off, the Peal of Andaman Sea’s history dates back to 500 years. In the 16th century, Phuket was well-known to many Europeans because of its natural resources, which included tins, hardwoods and rubber. When the European mining companies were invited in, major public infrastructure such as roads and canals were also built and two styles of building in particular stand out: the shop houses (Sino-Portuguese style) and the big mansions (Sino-Colonial style).

Nowadays, many old buildings have been converted into shops, museums, restaurants and hotels. This Old Town of Phuket also became one of the best tourist attractions on the island.

What to see in Phuket island

You might already have heard of this one. Patong beach is probably the most famous beach on Phuket island. Loads of people. Lots of activities and energy and one of the destinations of many cruises. Whether you are a peace or adrenaline seekers, this beach has it all for you. (read more)

The most visited temple on the island. It features beautifully decorated buildings that were built in a different period and a 60 metre Chedi. Inside the buildings you will see fantastic paintings all over the wall. Definitely a must-see. (read more)

This is just the place you will experience one of the most stunning sunsets you have ever witnessed. The cape is located at the south of Phuket and is has been a meeting point for hundreds of tourists. Be there early to secure your perfect spot because it will get crowded. (read more)

You cannot mention Phuket and left out one of its magnificent nearby islands, Phi Phi island. Words aren’t even enough to describe how beautiful the island is. It’s been in films and was the set of the film The Beach, starring Leonado Di Caprio. Located only 45 minutes away from Phuket island, the island group consists of 6 island and one being Phi Phi Leh that hosts the gorgeous Maya bay.

Another quiet beach located almost exactly at our doorstep! Kalama beach is gorgeous, yet isn’t well-known to many tourists. There are many kinds of activities suited for everybody that you can do here. Hence, it is ideal for a relaxing getaway. Check out our hotel deals now and book your dream holiday! (read more)

Come on, now. We know the Big Buddha has come up to your search about Phuket island at least a couple times, so why not check it out? The Big Buddha is one of the most famous tourist attractions on Phuket Island. It’s 45 metres tall and the site offers a 360-degree view of the island. I don’t think I need to say more to convince you (read more)

Known for its cave and lagoons, Phang Nga Bay is characterized by limestone cliffs and rock formations. It is also one of the best places for kayaking. Wouldn’t hurt to put it on your trip, right?

This is a must! Home to some of the most splendid coral reefs in the world, Similan is a perfect dive site and a place for tourist who loves to explore. The islands offer it all; crystal clear water, stunning rock formations, a national park and beautiful beaches.

One of the closest snorkeling and dive site, only 12 km south of Phuket or 30 minutes by speedboat. Sightseeing, snorkeling, scuba diving, ATV are available by the tour operator in town. Accommodation are available . A hilltop viewpoint on the bay’s south offers a magnificent view of the whole island. (read more)

Rawai Beach is historic for being the very first beach on Phuket island dedicated to tourists. Today, it is a beloved destination and among other things, it is the location for day-boat trips to the various islands of Phuket like Racha Island, Coral Island or Koh Lone. (read more)

What to do in Phuket island

Without a doubt, Phuket island is one of the most beautiful places that anyone can visit on the planet. When you arrive on the island of Phuket in Thailand, there are several things you can do. In this piece, we are going to list and discuss some of the most exciting and amazing things you can enjoy at this wonderful place.

If you have always imagined seeing tigers up close, then this is the place for you. Located at Moo 7 Kathu on the way to Patong beach, this is one place where you can have all the fun you want with your big cat. There are lots of ticket options for all age groups to select from. (read more)

Dolphin shows are a very big part of the experience in Phuket island. That explains why Dolphins Bay Phuket is such a famous site. It is located at the Mueang Phuket District. This aquatic theme park has all sorts of incredible marine life performances and unforgettable dolphin moments.

At this park, you can enjoy the best of hot days with your loved ones. The park has several attractions like the Family Raft Ride, Whizzard, Kid’s Aqua Play Pool and Aqua Park, Lazy River, Wave Pool, Super Bowl, and Boomerango and a lot more.

For the lovers of water and all kinds of aquatic adventures, this is another destination with memories for a lifetime. It has amazing sections like the Tree House Beach Lounge, Canopy, Bay Grill, Sunset Bar, Blue Tree Lagoon and the unbeatable Tree House Restaurant. (read more)

Those who have been to Phuket will recollect vividly that it is the paradise of zipline activities. One of the best of these locations is the Flying Hanuman. Located in Kathu, this is the most famous zipline in all of Thailand. With as much as 15 ziplines and 28 platforms, you have more than enough to choose from.

If you want to get rid of all your fears, then you should start your practice from the Hanuman World. As an adventurer, try out the rainforest skywalk here and savor the best of tropical beauty. Phuket is truly paradise on earth. (read more)

This is the finest of all cabaret shows anywhere in Phuket. If you want to have the most memorable evenings laced with the best entertainment performances and all kinds of shows, Simon Cabaret is the most highly recommended.

Muay Thai is a national sport of Thailand and it is known all over the globe. You should see some of the most legendary Muay Thai fighters in the world in action at the Patong Boxing Stadium. This happens every Saturday night – never miss any! (read more)

Another pleasurable experience you must enjoy in Phuket is having several surf sessions at the Surf House. This is a primary location for board lovers who always want to make the best of the holidays and vacation seasons. (read more)

Set in Kamala beach, only 50 metres from Glam Habitat Hotel, Phuket FantaSea is a heaven for all. Its highlight is the “Amazing Kamala” show, which combines traditional Thai art with modern special effects. There is also elephant and animal shows in a massive theatre, Palace of the Elephants Theatre (read more)

The park boasts of well over 1,000 exotic bird species collected from Africa, Asia, South America and other parts of the globe. This place has the greatest concentration of exotic birds of an aviary park in all of Phuket. (read more)

Phuket Crocodile World offers memorable shows. Even though the facilities might not be extremely shiny as in some other places, it is nonetheless welcoming and decent – after all, it is a crocodile farm. (read more)

Thai Food You Should Not Miss in Phuket island

If there is one thing that Thailand is beloved for, apart from the wonderful people and the majestic scenery, then it is absolutely delicious meals from this great country. If you ever find yourself in Thailand then here are ten delicacies that you should not miss.

If there is any meal that will leave you craving for more in Thailand it is Thai basil chicken. You can get this delicacy at excellent Thai restaurants or even on the streets. Basically, it is chicken that has been stir-fried with the legendary Thai basil, the serving is often with rice and fried egg placed delicately in one corner. (read more)

Another legendary dish in Thailand is the pad Thai. Also a stir-fried rice noodle dish, it is very common on the streets and in eateries. It is often made using rice noodles, chicken, shrimp or tofu alongside peanuts, egg and beans sprouts. Everything is usually followed by the tasty pad Thai sauce. (read more)

This perfect blend of massaman curry paste and chicken curry is one of the most delicious things you can taste in Thailand. Nothing contains more spice and sweetness more than this. (read more)

Thais are known for some of the finest meals. Try this nice blend of soft chicken that has been fried with roasted cashew nuts.

Very easy to prepare, this creamy preparation is one you can use to pamper yourself and loved ones. It is also very healthy!

Also known as lemongrass shrimp soup, this is one soup you will definitely find most memorable. (read more)

Also called the chicken coconut soup, it is a fantastic mix of nutrients and it is incredibly creamy and tasty because of the coconut milk used in it. (read more)

This is better tasted than described. It is an incredible blend of the tastiest rice and prawn all served inside a pineapple. No wonder it has been described as a taste of heaven by many who have enjoyed it.

Also known as the green papaya salad, this is a very much-loved delicacy all over southeast Asia and you must definitely try out the Thai version of it. It is made using unripe papaya that has been shredded to form a really spicy and delicious salad. Green beans, soy sauce, long beans, soy sauce and other ingredients all blend together to make a dish that is totally out of this world in its taste.

This is better classified as more of an appetizer but it nonetheless remains one of the most cherished delicacies on the streets of Thailand. It is usually made as a blend of shrimp, rice noodles, meat, vegetables and more, all these are rolled up in a light pastry bed and deep-fried – crunchy and very nice!

could also be interest for you 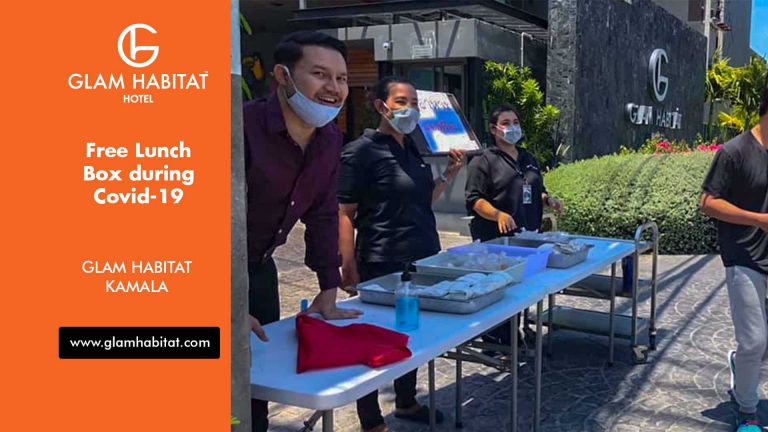 Hello from Glam Habitat team! Previous Next We hope you stay safe and sound during this time of... 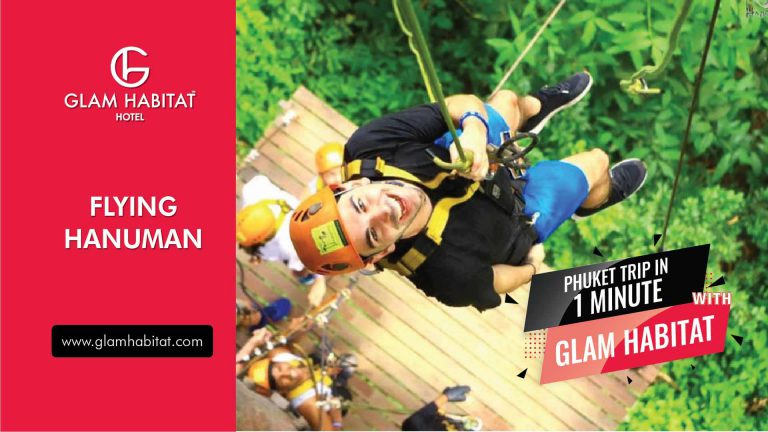 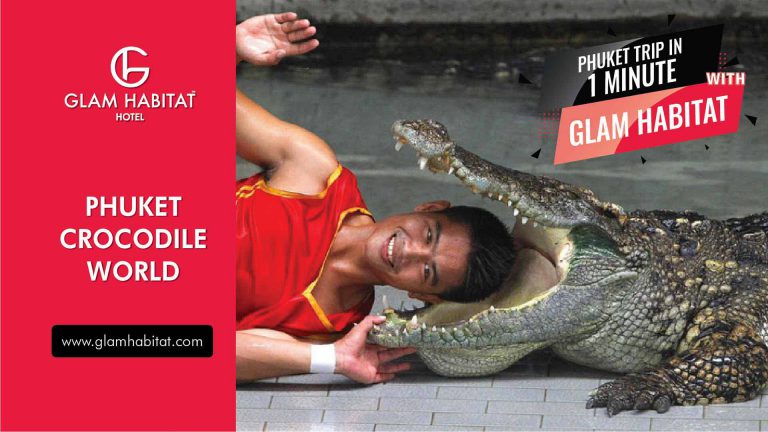 Phuket Crocodile World Perfect for Vacation It is a fact that Phuket is one of the most wonderful...